Gerry Altmann, editor of the journal Cognition, says that NY Times writer Nicholas Wade misrepresented his view on the Marc Hauser affair. Here’s a quote from the article:

Difficulties in Defining Errors in Case Against Harvard Researcher

Also last month his principal accuser outside of Harvard, Gerry Altmann, allowed that he may have spoken too hastily. Dr. Altmann is the editor of Cognition, a psychology journal in which Dr. Hauser published an article said by Harvard to show scientific misconduct.

When first shown evidence by Harvard for this conclusion, Dr. Altmann publicly accused Dr. Hauser of fabricating data. But he now says an innocent explanation, based on laboratory error, not fraud, is possible. People should step back, he writes, and “allow due process to conclude.”

Writing in his blog, Altmann reproduces their actual e-mail correspondance:

should one assume that you are now receding from or withdrawing your statement to me of Aug 27?  “Given the PUBLISHED design of the experiment, my conclusion is that the control condition was fabricated,”

I’m not withdrawing it. … Given the content of the examined videotapes, any other conclusion than the one I reached and which you quoted would simply be implausible. So I stand by what I said.

Also on his blog, Altmann stated:

In fact, there has been no stepping back. As I make very clear in this blog (and repeated in emails to Mr. Wade…), the information I have received, when taken at face value, leads me to maintain my belief that the data that had been published in the journal Cognition was effectively a fiction – that is, there was no basis in the recorded data for those data. I concluded, and I continue to conclude, that the data were most likely fabricated (that is, after all, what a fiction is – a fabrication).

He wrote a letter to the editor of the NYT to set the record straight, and he’ll post the link if it’s published.

She tells the good doctors about the terrible assault that potentially caused the temporal lobe injury they attributed to alcohol damage. A cheesy animation shows degeneration of orbitofrontal cortex while Amen discusses the cerebellum. Totally laughable.

Inclusion of previously unpublished data demonstrated that reboxetine (a norepinephrine reuptake inhibitor) is an ineffective and potentially harmful antidepressant. The efficacy of reboxetine was inferior to SSRIs (fluoxetine, paroxetine, and citalopram), and its response rate was not significantly different from placebo.

Objectives To assess the benefits and harms of reboxetine versus placebo or selective serotonin reuptake inhibitors (SSRIs) in the acute treatment of depression, and to measure the impact of potential publication bias in trials of reboxetine.

Outcome measures Remission and response rates (benefit outcomes), as well as rates of patients with at least one adverse event and withdrawals owing to adverse events (harm outcomes).

Data extraction and data synthesis The procedures for data extraction and assessment of risk of bias were always conducted by one person and checked by another. If feasible, data were pooled by meta-analyses (random effects model). Publication bias was measured by comparing results of published and unpublished trials.

Gunther von Hagens’ BODY WORLDS 1, 2 and 3 (hereafter referred to collectively as BODY WORLDS) are traveling exhibitions of “real human bodies” that have attracted very large crowds and a great deal of controversy.  The bodies in question are human corpses that have been plastinated through a process that infuses body tissue with polymers and resins to prevent decay and that allows whole bodies to be posed. The strong yet ambivalent public response is partly due to the multiple levels on which the exhibit operates. In large part, BODY WORLDS expresses a “museum ethos” oriented to public education.  Its didactic aim is to communicate the importance of preserving one’s health and the complexity of the human body. However, BODY WORLDS is also an art show. Some of the “whole-body plastinates” are outfitted with sports gear such as skis and skateboards to “bring them to life” as dynamic sculptures. Other bodies are transformed into surreal body-sculptures, for example, a man holding his own skin or a body opened up like a chest of drawers. Small cards that bear a title, the stylized signature of Gunther von Hagens, and the date of creation are placed alongside many of the plastinates, marking them as artwork and von Hagens as the artist. Finally, BODY WORLDS also entertains the public in the manner of a circus or freak show that presents a shocking and fascinating spectacle of death in exchange for a fee.

This target article in the American Journal of Bioethics is followed by 12 Peer Commentaries ranging from No Dignity in BODY WORLDS: A Silent Minority Speaks and Metamorphosis: Beautiful Education to Smarmy Edutainment to The Virtues of Blurring Boundaries in BODY WORLDS.

BODY WORLDS exhibitions have seen their share of controversy:

In January 2004, the German news magazine Der Spiegel reported that von Hagens had acquired corpses of executed prisoners in China; he countered that he did not know the origin of the bodies, and returned seven disputed cadavers to China.[38]

In 2003, while promoting a display in the Hamburg Museum of Erotica Von Hagens announced his intention to create a sex plastinate.[31] In May 2009 he unveiled a plastinate of a couple having sex, intended for a Berlin exhibition.[32] 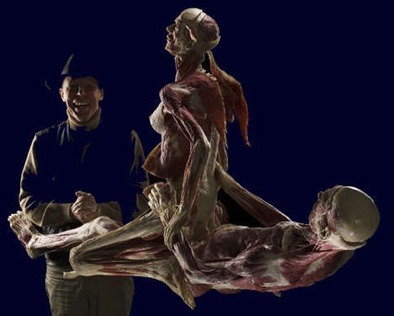 Finally, Lady Gaga might incorporate the theatrically flayed bodies into her act (in case her plastinated feminist meat dress wasn’t enough for you):

LADY GAGA has come up with a way to make her live shows even more shocking – having dead bodies on stage.

The singer is teaming up with corpse-preserving scientist GUNTHER VON HAGENS to spice up her already blood-soaked Monster Ball Tour.

Now GaGa wants the gruesome body pickler to design the set for her tour when it reaches Las Vegas next March.