“What I have seen on the news with this debate of Kavanaugh versus Dr. Ford, it’s one of the most upsetting things I have ever witnessed.”

Lady Gaga the Neuroscientist schools us on common symptoms observed in many sexual assault survivors: avoidance and hyperarousal.

Janeane Garofalo as Dr. Mills, a fruit fly geneticist
Ingrid Jungermann as Ingrid, who wants a test to determine whether or not she’s gay

Dr. Mills: “Yeah they all left for Rockefeller University.”

Dr. Mills: “They seemed very happy and successful when they worked there, and those two things make me very nervous.”

Ingrid: “I Googled you too and I know for a fact that you’re working on some serious secret gay fruit fly shit.

Dr. Mills: “A. it’s not top secret at all, and B. fruit flies aren’t people. People are crazy, right?

We’ve to widen the knowledge
of how our brain works to understand
Or nothing will, will ever change 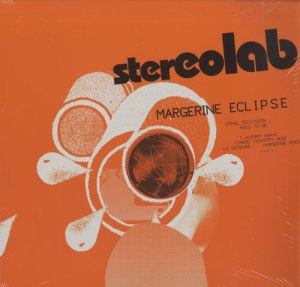 The French pop / post-Krautrock English band Stereolab are known for their vintage synthesizers and socially conscious lyrics. Margerine Melodie, from their 2004 album Margerine Eclipse, suggests that neuroscience research will help us overcome a hyper-competitive world of struggle and domination.

Through consumerism, escape and struggle
As well as inhibition

All these mechanisms that preserve balance
Biological well being

The video below was included as Supplementary Material with the Scientific Reports open access article (Suzuki et al., 2012). It shows how the system manipulates the wearer’s reality by seamlessly switching between live and recorded scenes.

Demonstration movie of the SR system. The upper left panel shows the image stream
presented on the HMD screen. This is the subjective view watched by the participant.
Live scenes are bordered with orange and recorded scenes with green. Neither the
border nor the “live” caption was visible to the participant. The upper right panel
shows an objective view of the participant’s actual environment. The lower panel
indicates a conversation between an experimenter (captioned in white) and
participant (captioned in blue).

The movie began with a live scene but switched to a recorded scene at 00:34 (Normal
Question scene). The participant did not notice the switch. During the Normal
Question scene the participant carried on a natural conversation without doubting the
reality of the situation, although in actuality, the experimenter was not in front of him.
At 1:32, the Doppelgänger scene began. In this condition, the participant did not
initially notice the substitution, but became aware of it at 1:40 when he saw his own
image (Doppelgänger). After the details of the SR system were explained, the Fake
Live scene began at 2:07. He could not detect the scene is a recorded one.

After the experience of these scenes, some participants were confused about which
scenes were real (see episode after 2:45). They were less confident in discriminating
whether they were experiencing a recording or actual reality, even when they were
genuinely interacting with the experimenter.

Any history of epilepsy, hysteria, and dancing plagues must include…

In late 19th century Paris, people with epilepsy were treated alongside those with hysteria in the now famous Salpêtrière Hospital, where both conditions were deemed to have a neurological basis. When Jean Martin Charcot became chief physician at the Salpêtrière Hospital in 1862, he described himself ‘in possession of a kind of museum of living pathology whose holdings were virtually inexhaustible’. He opened the doors of his ‘living museum’ and exhibited his prize specimens to all of Paris. By putting his patients on display, Charcot introduced a vogue for pathology that permeated well beyond the world of medical enquiry and into the public psyche and vernacular. Not only did Charcot’s demonstrations provide the inspiration for high culture in the form of operas, plays and novels, they also provided the inspiration for the ‘gommeuses epileptiques’ (epileptic singers), who entertained the masses at the café concerts. This paper explores the foundations of our current medical approaches to mental illness and epilepsy, with a particular focus on the boundaries that emerged between hysteria and epilepsy in 19th century Paris. These clinical boundaries were both shaped by and reflected in the popular entertainments in the city.

The angular ‘experimental’ dance moves in parts of Madonna’s ‘Frozen’ video (1998) strongly resemble the automatisms seen in many temporal lobe seizures. The same could be said for Lady Gaga’s trademark ‘claw’, prominent in her ‘Bad Romance’ video (2009), and waved back at her en masse by her fans at her stadium shows. It is identical with some of the dystonic posturing seen in generalised seizures.

Others in the genre include Epilepsy is Dancing by Anthony & the Johnsons (2009), and the Black Eyed Peas’ Let’s Get Retarded (2003): ‘Let’s get ill, that’s the deal…Lose your mind this is the time…bang your spine…bob your head like epilepsy…Get messy, loud and sick’ .

However, the authors neglected to mention anything by Ian Curtis and Joy Division, including She’s Lost Control and The Atrocity Exhibition. As we all know, Curtis, who suffered from epilepsy and depression, tragically hanged himself at the age of 23. He was known for his unique dance style reminiscent of a seizure, which he occasionally did experience on stage. This was famously depicted in the biopic Control. A clip from the film, entitled Ian Curtis epilepsy dance, is available on YouTube. But you should really watch this jaw-dropping live performance of Dead Souls by the late Ian Curtis.

Asylums with doors open wide
Where people had paid to see inside
For entertainment they watch his body twist
Behind his eyes he says, ‘I still exist.’

SpongeBob: What if Squidward’s right? What if the award is a phony? Does this mean my whole body of work is meaningless?

Please don’t ever let me down
‘Cause you know I’m not so sure
Do I have the speed to carry on
Burn you out of my mind, I know

Like all SRL machines, this monster groans and creaks with the cries of distressed humanity, but it’s impossible not to also read the tormented rodent in the same way, as a metaphor for beleaguered humankind in a hopeless world. This work mocks the repeated rituals for which robots were originally designed, as they engage in more violent but equally wrenching variants on the myth of Sisyphus

Lady Gaga – Born This Way (Audio) currently has 2,832,550 “listens” on YouTube since being posted yesterday. It’s reminiscent of Madonna’s Vogue from 1990 (watch video).

Until then, let’s watch this lecture by Oxford University professor Nick Bostrom, part of the Hard Problems in Social Science symposium.

But more importantly, what will Lady Gaga wear to the Grammys tomorrow? Such suspense!